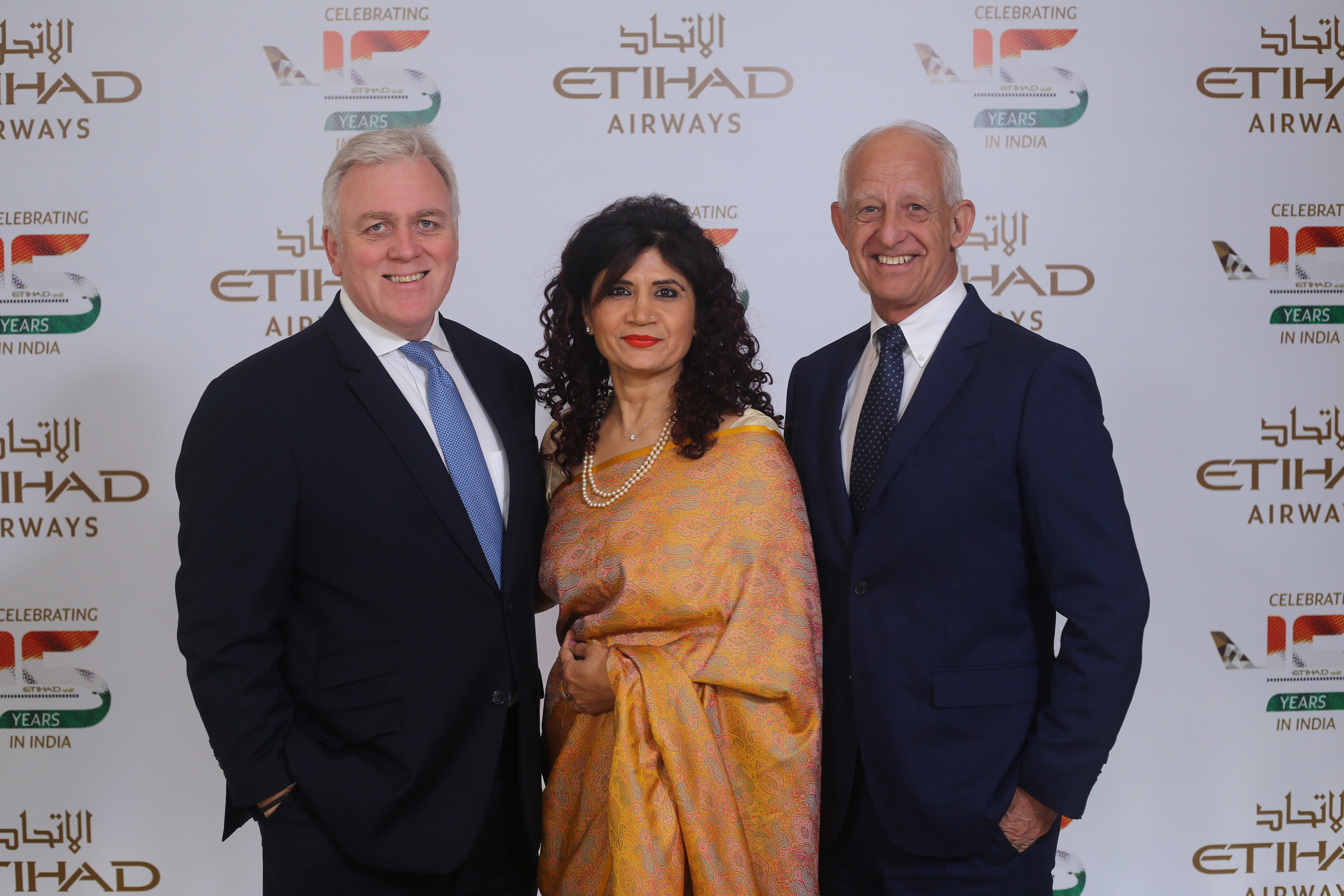 India is the airline’s largest market outside UAE

Etihad Airways (Etihad), the national airline of the United Arab Emirates, hosted an event for frequent flyers and key trade, government and media partners as part of its ongoing activities to celebrate 15-years of flying to India.

The airline began operations in India in September 2004 and it has grown to become its second largest market after the UAE, carrying over 18 million passengers to and from the country.

Mumbai was the first route in the country to be served by Etihad and today the city ranks highest in terms of total passengers the airline has carried over the years, with the number exceeding 3.5 million. Owing to passenger demand on this route, Etihad introduced a fourth daily service to Mumbai last year, underscoring its commitment to offer guests greater choice and more travel options between Abu Dhabi and key destinations across its network. The cities of Delhi and Cochin rank second and third, with the airline carrying over 3.2 million and 2.3 million passengers on these routes respectively over the years. Etihad has also added a fourth daily frequency on its Delhi – Abu Dhabi route, to meet high demand on this sector.

As a result of its optimised schedule of non-stop flights between the United Arab Emirates and India, appealing to greater numbers of point-to-point business and leisure passengers, Abu Dhabi is now the most popular destination for Indian travellers on the Etihad network.  Today, Etihad operates 161 return flights per week between Abu Dhabi and 10 key Indian gateways of Ahmedabad, Bengaluru, Chennai, Cochin, Delhi, Hyderabad, Kolkata, Kozhikode, Mumbai and Thiruvananthapuram, connecting each of these gateways to international destinations throughout the Middle East, Europe, North America, and Africa.

London is the most popular destination after Abu Dhabi, and is amongst the top five destinations from eight of the airline’s ten Indian gateways. Etihad Airways operates four daily services to London Heathrow from Abu Dhabi, providing optimised timings and easy connections from India.

New York has emerged as another top destination for travellers from India, with the US Pre-Clearance facility at Abu Dhabi International Airport remaining a major reason for the popularity of Etihad’s hub as a transit point to the United States. A first-of-its-kind outside North America and Ireland, the facility enables travellers to clear US customs and border patrol in Abu Dhabi and to arrive as domestic passengers in the USA, avoiding lengthy immigration formalities.

Danny Barranger, Etihad Airways’ Senior Vice President Global Sales, said: “Etihad Airways remains committed to its largest and busiest market, India. The UAE and India have shared strong commercial, cultural and historic relations and we will continue to honour these excellent trade and tourism ties through closer partnership with our friends in the Indian travel trade. We are proud that today Etihad Airways serves more destinations in India than any other country across its network, truly supporting the growth of air travel to and from the country.”

Neerja Bhatia, Etihad Airways’ Vice President, Indian Sub-continent said: “India plays a crucial role in Etihad Airways’ growth strategy, contributing significantly to the airline’s global operations and we are honoured to support demand in one of the fastest growing aviation markets in the world. Our unwavering commitment to the country over the last fifteen years has resulted in Etihad Airways becoming one of the most preferred airlines for travellers from India, and we will continue to offer guests unmatched hospitality and convenient access to destinations across the world.”

Etihad continues to enhance its product offering on its services to India.  The airline has increased frequencies and added newer, larger aircraft, including the Boeing 787 Dreamliner, which serves cities including Mumbai, Delhi, and Hyderabad. Flights operated by the 787 feature the airline’s next-generation cabins including Economy Smart Seats and Business Studios, while the A380, which is available to guests on journeys from Abu Dhabi to New York, London, Paris, Sydney and Seoul, feature the First Apartment and the revolutionary three-room cabin, The Residence.

Etihad’s narrow-body Airbus A320 and A321 family fleet features refreshed cabins, including comfortable recliner seats in Business, while Economy boasts new ergonomic seating, USB charging points, and personal device holders at every seat enabling guests to download its E-BOX Stream wireless entertainment service, with more than 300 hours of movies, TV programming, music, and more, available to stream directly to their own device.