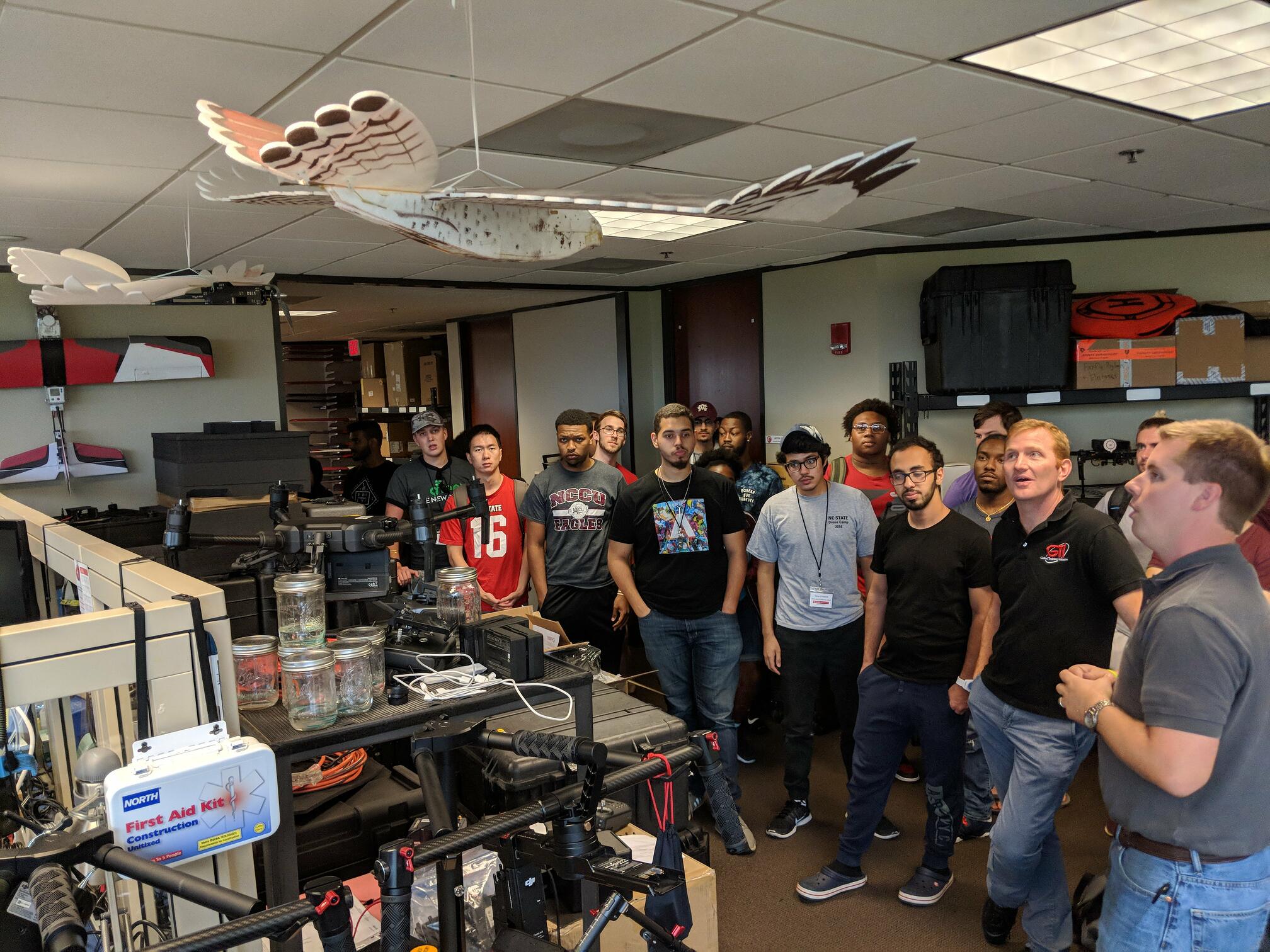 On March 12th, 2019, I appeared before the Subcommittee on Aviation of the U.S. House of Representatives Committee on Transportation and Infrastructure during a hearing titled, “Looking Forward: Aviation 2050.” In my testimony, I highlighted that PrecisionHawk is a success story for the current and future state of the growing commercial UAS industry, and that our technology provides critical intelligence for businesses and government entities all across the country.

American businesses are using drone technology to bolster their competitive positions in the global market, lower operational costs, and increase safety. Governmental agencies are deploying UAS to improve their situational awareness during natural disasters and reduce recovery time once they’ve come to pass. However, though adoption has increased in recent years, there is still so much room for growth.

To promote widespread use of UAS, PrecisionHawk is committed to initiatives that promote the safe integration of UAS into the national airspace, including the FAA Pathfinder Program, NASA UTM Program, FAA Safety Team, FAA Drone Advisory Committee, and the UAS Integration Pilot Program. With the support of forward-leaning regulations, the American drone industry has the opportunity to lead in global UAS integration and unlock the full potential of drone technology.

Leveraging Our Capabilities for the Public Good

We take pride in conducting operations that are not only commercially beneficial but also serve the public interest. In 2018, PrecisionHawk partnered with Concourse Federal Group and Booz Allen Hamilton to deploy UAS in support of an environmental impact study for the Department of Veterans Affairs West Los Angeles Campus. The vast Campus spans 388 acres and provides care for the largest homeless veteran population in the United States. Using UAS with visual and Light Detection and Ranging or LiDAR sensors, we were able to identify and geolocate over 130 species of trees and plants on the Campus. We also captured high quality data on building and pavement conditions across the entire Campus — in only a few days. The data we collected was used to build a “digital twin,” which is a 3-D rendering of the Campus that depicts environmental conditions. The environmental impact study is being used by the Department of Veterans Affairs to support the master plan and redevelopment of the Campus to facilitate delivery of services and shelter to several thousand homeless veterans.

We have also seen what a powerful tool UAS can be in emergency response operations. Last fall, PrecisionHawk deployed UAS teams to aid in the response efforts in Hurricanes Florence and Michael. During Florence, we worked with the North Carolina Department of Transportation (“NC DOT”) Division of Aviation. We used UAS to capture and transmit real-time imagery and video of mobility infrastructure flood and damage assessments including impacted bridges and dams, road wash-outs, and eroded beaches across the south-eastern part of North Carolina. The data captured enabled NC DOT to facilitate real-time decision-making around road closures, evacuation routes, and re-opening thoroughfares. The images captured served as a baseline record that was used to support the expansion of a federal disaster declaration to additional counties devastated by the storm.

PrecisionHawk also worked with two large east-coast energy utility companies after Hurricane Florence in South Carolina, and Hurricane Michael in Florida, to survey outage areas. During these operations, we located down powerlines and flooded substations to determine where to safely deploy repair crews and what equipment they would need to bring. We also deployed UAS to locate safe access points for repair crews and to help them avoid using roads that were flooded. These missions helped restore power faster to homes and businesses in South Carolina and Florida. Even one day of energy disruption can cost millions of dollars.

In partnership with an insurance company, we are working to expedite the insurance claims process by using UAS data to assess damage to structures after natural disasters. For people who have lost their homes or businesses, the emergency continues until after their insurance claims are processed and their properties are rebuilt. Thanks to expanded regulations under the FAA Reauthorization Act of 2018, PrecisionHawk is able to use drone technology to help people get back into their homes and businesses faster in the aftermath of a disaster.

UAS are engaging our nation’s youth, in aviation, in a way that we haven’t seen in decades. The low cost and ease of use of consumer UAS has made the practice of aviation accessible for the first time in history. We are seeing more and more high schools and colleges integrate UAS into their program offerings. For some pilots, flying begins as a hobby and later turns into a part-time job and possibly a career. At PrecisionHawk, we have hired many college students during their summers, and they have had the opportunity to travel across the country with us and learn to fly. Some of these students have stayed on with us after graduation, as employees.

UAS are also opening up employment opportunities that may not otherwise exist, particularly for persons who have mobility challenges. For example, in rural Missouri as a young man, Andrew Kuster suffered a tragic injury that left him partially paralyzed and confined to a wheelchair. His interest in drone technology started as a hobby, but before long he figured out how to put the technology to productive commercial use. He started a drone business—Tri County Drone—which inspects power lines and rooftops, surveys farms and construction sites, and takes action videos of motocross sports, across all of southern Missouri. UAS provide Mr. Kuster with the ability to be gainfully employed doing work that would be impossible for him to do otherwise, and to provide for his family including his young daughter. In his own words, Mr. Kuster states that “Being self-sufficient is something I pride myself on.”

Mr. Kuster is a member of PrecisionHawk’s own drone pilot network, which allows people to hire qualified operators on-demand to conduct operations such as roof inspections in their local communities.

UAS are also being used across several industries including mining, energy, and insurance to enhance worker safety and efficiency. Climbing roofs or utility poles can be hazardous tasks – by outfitting adjusters and inspectors with UAS, we are helping them perform their work safer and faster. We often focus on the risks that UAS may introduce into the NAS and forget to consider the risks that they mitigate in terms of worker safety. For example, 34 individuals lost their lives due to tower-related incidents between 2013 and 2016.

The future uses for drones are only limited by our imagination. By 2050, we will have full integration of airspace at low and high altitudes, including a variety of vehicles of all sizes, passenger drones, traditional aircraft, and even vehicles we have yet to imagine. We will break the paradigm of a single drone completing a single mission. In the future, a single drone will conduct multiple missions simultaneously. For example, a drone on a mapping mission will also monitor traffic during rush hour, detect fires, and automatically report accidents to authorities, enabling quicker response times. Different drones will also communicate with each other to complete a single mission, such as search and rescue, or delivery. Drones will trigger automated actions including inspection, repair, insurance claims processing, and even the ordering of materials.

Larger drones will launch smaller drones to perform rapid-response missions. They will detect small atmospheric and geological changes and provide us with early warning signals to help us prevent disasters, such as mud slides, earthquakes and tsunamis before they occur. By monitoring water and food quality and insect populations, drones will prevent disease outbreaks. They will monitor the population of animal and plant species to give us early warnings before they become endangered. Drones of the future will be a combination of aircraft and ground autonomous vehicle, roaming the streets to compete missions and recharge power, and then flying to a location where they are needed for the next mission.

These applications will all be developed by people who have access to UAS technology and use their imaginations to discover solutions and push the boundaries of what is possible. The key to unlocking the limitless future potential of drones is simple: put in place the regulatory building blocks to enable flight in more ways and in more places: flights over people, flights at night, flights in controlled airspace, flights beyond visual line of sight, and fully autonomous flights managed by a UTM system.

With the implementation of Part 107 in August of 2016, the United States took the global lead in establishing a set of reasonable regulations to govern basic commercial operations. Those regulations have opened up many of the commercial and societal benefits that I have mentioned. More than two years later, many other jurisdictions, such as Canada, Japan, and the European Union, have yet to finalize their basic commercial rules.

The United States must continue to lead with forward-leaning regulations. The FAA has the opportunity, right now, to lead the world in creating remote identification (“Remote ID”) regulations and standards. This is a topic that many of us in the industry spent months of time on during an FAA Aviation Rulemaking Committee that spanned the summer of 2017, where it was impressed upon us that the need for these solutions was urgent. Remote ID is considered essential by national security stakeholders in order for the FAA to proceed with any other rulemaking for advanced UAS operations, such as flight over people. Nearly two years later, we are still awaiting a proposed regulation from the FAA on this topic. The industry is eager for this to move forward, and some companies have even deployed remote identification solutions in advance of the FAA’s rulemaking, in order to start solving safety and security challenges. We hope that Congress proceeds with the next steps in this process as soon as possible and completes the pending rulemaking for flight over people and night operations, which will unlock even more beneficial operations.

One way the United States could easily lose its global leadership advantage is to pursue policies that create a patchwork of inconsistent, confusing, or burdensome UAS regulations that differ from state to state, city to city, or even block to block. Proposals in Congress over the last two years to carve up the airspace arbitrarily and undermine the FAA’s exclusive jurisdiction over the safety of the skies is the largest regulatory threat our industry faces. Last August, I wrote an editorial on this topic. Thankfully, Congress codified the UAS Integration Pilot Program – which will further an understanding on the possible state, local and tribal government interests in UAS – while maintaining the FAA’s exclusive jurisdiction over airspace.

Congress recently directed the Government Accountability Office to prepare a report on fee mechanisms concerning UAS. While we need FAA and other agencies to have sufficient resources to support our industry, we are just in our infancy. The imposition of new fees or other costs could severely damage operators like us. We believe the drone industry is worth an investment by the country as a whole, during this period, and feel that fees should be deferred until stable and repeated sources of revenue are well established, similar to the early years of traditional commercial aviation in the U.S. The industry is also working hard to shoulder much of the research and development, infrastructure, and network costs of technology solutions such as Remote ID, the Low Altitude Authorization and Notification Capability, and UTM, so that the FAA can be most efficient with the resources it has available for UAS programs.